Feasting with God #51 – Contributing the Best of It

Contributing the Best of It 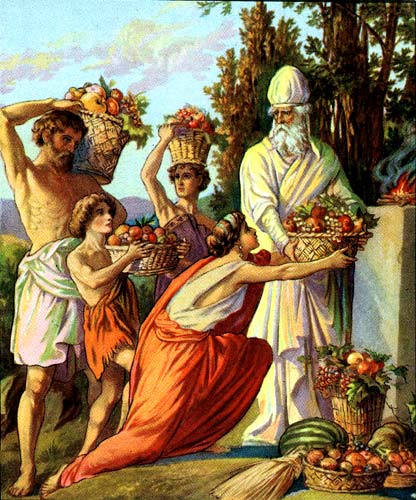 29“‘Out of all the gifts to you, you shall present every contribution due to the Lord; from each its best part is to be dedicated.’  30Therefore you shall say to them, ‘When you have offered from the best of it, then the rest shall be counted to the Levites as produce of the threshing floor, and as produce of the winepress.  31And you may eat it in any place, you and your households, for it is your reward in return for your service in the tent of meeting.  32And you shall bear no sin by reason of it, when you have contributed the best of it.  But you shall not profane the holy things of the people of Israel, lest you die.’”

The Levites were appointed as the priests of the people of Israel; they made the necessary sacrifices and preached the Word of God.  But while all the other tribes would receive a portion of land to which they were coming, the tribe of Levi received nothing.  While all the others had an income, the Levites were those who served the people spiritually.  Therefore God instituted the system of tithing: 1/10 of the people’s livestock and possessions was to be donated to the Levites to support them.

This generosity could easily have gone to the heads of the Levites, so God made an additional demand: “Out of all the gifts to you, you shall present every contribution due to the Lord; from each its best part is to be dedicated.”  The animals that were brought to the Levites were slaughtered, butchered, divided in pieces, and the choice pieces, the most delicious, were to be burned for God.  The priests then were able to keep what was left over.

Perhaps your parents, like mine, trained you to give to church 1/10 of your income.  It’s a good practice, if the correct mindset accompanies the practice.  Two stories from Scripture illuminate the sort of “tithing” God wants.

First is the story of Ananias and his wife Sapphira.  These two became members of the Christian faith, and so were doing their duty to support the Christian church.  And they were property owners.  They sold some property, and gave some of the proceeds to the church, keeping some of it for themselves.  But sinfully, they reported that they had donated all of their gain.  What motivated the lie?  Probably they wished to appear more generous than they actually were in the eyes of the other Christians.  But as St. Peter said, “You have not lied to men but to God” (Acts 5:4).

Second, the story of Cain and Abel.  “Cain brought to the Lord an offering of the fruit of the ground, and Abel also brought of the firstborn of his flock and of their fat portions.  And the Lord had regard for Abel and his offering, but for Cain and his offering he had no regard” (Gen. 4:3-5).  Cain brought out of obligation, but Abel brought “the firstborn” and “their fat portions.”  He brought the best.

You are probably familiar with the catchphrase, “God loves a cheerful giver.”  It comes from Scripture: “Each one must give as he has decided in his heart, not reluctantly or under compulsion, for God loves a cheerful giver” (2 Cor. 9:7).  Tithing is a great practice—but it is no longer a command!  Even at the time of Israel’s wanderings through the wilderness, do you think God loved the thought of the Levites begrudgingly taking the most mouthwatering pieces of their income and burning them for God?

God commanded that the best be given to him, not so that the Levites would resent him.  God never commands behavior simply for behavior’s sake.  God wanted the attitude that is connected with the behavior.

Consider the situation of Israel: they were wandering in a desert, living in tents, no place to call home—they were on their way to the place they would call home.  Recall how they complained, virtually every step of the way, that maybe what they had was better than what they were promised.  God had a plan for them, a plan to bring them to a Promised Land flowing with milk and honey, a plan that would lead eventually to the birth of the one who would save all mankind.  God wanted the eyes of these Israelites not to be turned backward, toward their bondage, toward the paltry material possessions that they could earn; he wanted them turned forward, toward their liberty, toward the glorious blessings he would provide.  What better way to cause such a mindset than for the Israelites to give up the best of their material possessions.

That is what our offerings do.  When we put our check in the plate at church, it’s not because the church is a moneymaking industry.  It’s because we are learning to forsake these material blessings in favor of eternal, spiritual ones—a lesson that needs regular reinforcement.  Our eyes are focused on the divine, on the spiritual.  We give, not because we are commanded to, not because we must appease a wrathful God.  We give because we have received something infinitely better than these physical things.  God’s own Son—who was God himself!—died on a cross to pay the price for our sins.  This perfect blessing is ours.  What is there that we would prefer to hold onto other than this?

Lord Jesus, keep our eyes ever fixed on you, and the eternal blessings we have won from you.  Although we are also blessed by you with many earthly blessings, let us view these as only a trust from you, of which we are guardians, until we receive our eternal reward.  Lead us to ever more thankful hearts, and guide us to see your blessings in all things.  In your name we ask it.  Amen.