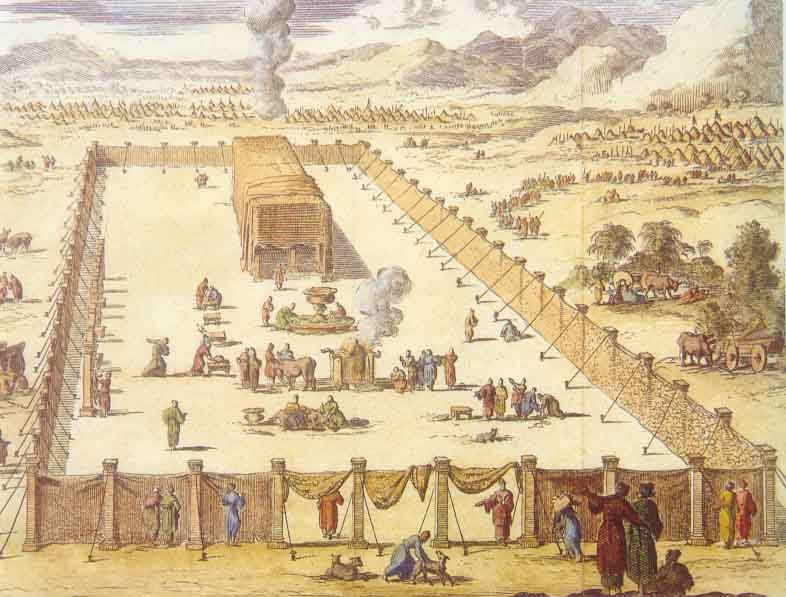 If your family was like mine growing up, you had daily devotions.  Ours were always right after supper.  While we kids were squirming, anxious to get out and play with our friends, Dad took up the devotion book and read, sometimes including questions about the devotion, sometimes with a recitation of the Creed or Luther’s Small Catechism, always ending with prayer.  Maybe you do something similar each day.  Maybe this devotional series is part of your routine.

The daily devotional life of Israel centered around this core: each day, once in the morning and once in the evening, they sacrificed a perfect male lamb.  This sacrifice is presented in an interesting way: it’s called by God, “my food for my food offerings.”  Does God need food and drink?

In Egypt, the Israelites would have been surrounded by a polytheistic religion in which worshipers provided food to placate their gods, although more commonly the Egyptians left food offerings at the tombs of loved ones, so that they could be sustained in the afterlife.  In Canaan, the Israelites were to be confronted with religions that sought even more fervently to feed their gods, so that the gods would be happy with them.  Does the true God want the same thing?

In the Apology of the Augsburg Confession, we state:

In Num. 28:4f. three parts of that daily sacrifice are repre­sented, the burning of the lamb, the libation, and the oblation of wheat flour.  The Law had pictures or shadows of future things.  Accordingly, in this spectacle Christ and the entire worship of the New Testament are portrayed.  The burning of the lamb signifies the death of Christ.  The libation signifies that everywhere in the entire world, by the preaching of the Gospel, believers are sprinkled with the blood of that Lamb, i.e., sanctified, as Peter says, 1 Pet. 1:2: Through sanctification of the Spirit, unto obedience and sprinkling of the blood of Jesus Christ.  The oblation of wheat flour signifies faith, prayer, and thanksgiving in hearts.  As, therefore, in the Old Testament, the shadow is perceived, so in the New the thing signified should be sought, and not another type, as sufficient for a sacrifice. (Ap XXIV 36-37)

In the Old Testament, the people of God were in training.  They were learning as children the building blocks of their education, the alphabet and simple addition and subtraction.  So they were taught to understand that, for their sins, a daily—a double-daily—sacrifice of blood was required.  And the creature to be sacrificed had to be perfect.  Its blood had to be given to God, and its meat burned.  Fine flour had to be offered as well, bread with the meat.  God thereby used a picture that they would have been familiar with to teach them: they would have been well acquainted with the idolatrous practices of placating gods with food offerings.  The true God informs them that, yes, indeed, there does need to be placation for sin.

But this was all training.  It’s fulfillment came in Christ, the ultimate perfect “Lamb of God, who takes away the sin of the world” (John 1:29).  His death, and no longer he burning of a lamb each day, took away all sins once and for all.  And as though to say, “I no longer need this food, for all wrath is turned away; therefore instead I give you this wonderful food,” God gives us, not the blood of animals, but “the blood of Christ,” and not the flour of fine wheat, but “the body of Christ” (1 Cor. 10:16).  To turn away God’s wrath, Jesus gave him the final offering.  And now we are given the blessed feast.

Lord, we thank you that, through the offering and sacrifice of your Son, you have turned away all wrath for our sins, and even more have given us the undeserved gift of a heavenly feast.  Let us receive this gift worthily, with believing hearts, and therefore be strengthened by it in faith and love, until we may finally come to your kingdom, where we will partake of the blessed heavenly banquet in eternity.  In your Son’s name we pray.  Amen.