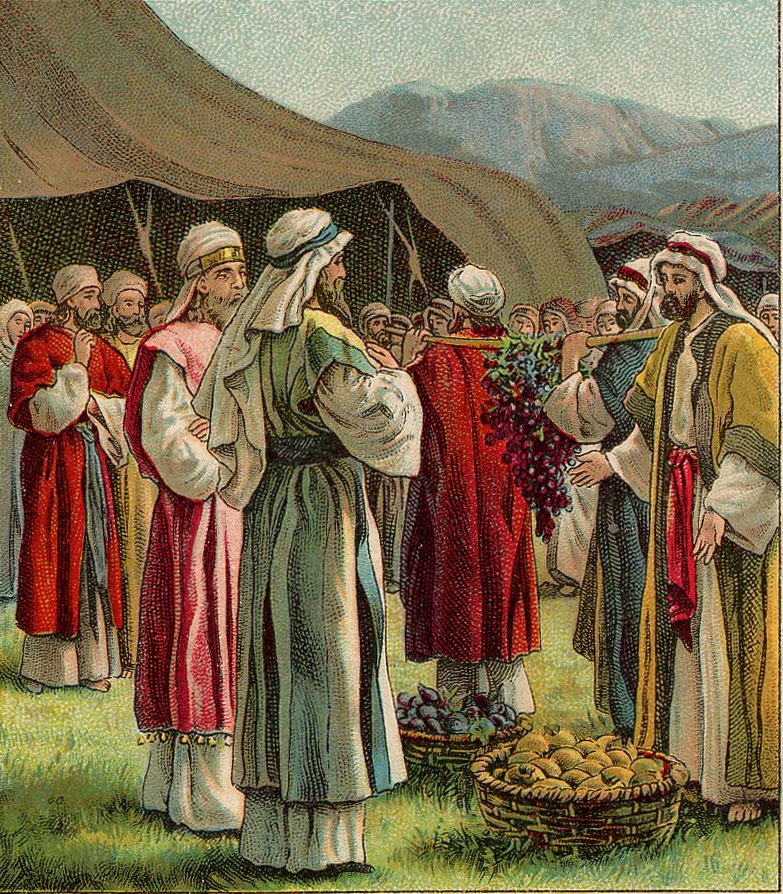 6And Joshua the son of Nun and Caleb the son of Jephunneh, who were among those who had spied out the land, tore their clothes 7and said to all the congregation of the people of Israel, “The land, which we passed through to spy out, is an exceedingly good land.  8If the Lord delights in us, he will bring us into this land and give it to us, a land that flows with milk and honey.  9Only do not rebel against the Lord.  And do not fear the people of the land, for they are bread for us.  Their protection is removed from them, and the Lord is with us; do not fear them.”  10Then all the congregation said to stone them with stones.  But the glory of the Lord appeared at the tent of meeting to all the people of Israel.  11And the Lord said to Moses, “How long will this people despise me?  And how long will they not believe in me, in spite of all the signs that I have done among them…?  21But truly, as I live, and as all the earth shall be filled with the glory of the Lord, 22none of the men who have seen my glory and my signs that I did in Egypt and in the wilderness, and yet have put me to the test these ten times and have not obeyed my voice, 23shall see the land that I swore to give to their fathers.  And none of those who despised me shall see it.”

“Well, that was dumb.”  I remember thinking that when, as a student in Sunday School, I first learned about Israel’s wandering in the wilderness.  40 years of suffering and yearning and hungering could have been avoided, if only they had trusted in God.  They made a really dumb mistake.  Joshua and Caleb even tried pointing out how little they  had to worry about: “And do not fear the people of the land, for they are bread for us.  Their protection is removed from them, and the Lord is with us; do not fear them.”  St. Paul repeats this concept in the New Testament: “If God is for us, who can be against us?” (Rom. 8:31).  Joshua and Caleb tried to tell the Israelites, “God has promised this land to us: with him on our side, we’ll eat our enemies alive!”

But their message of hope was met with intense hostility: “Then all the congregation said to stone them with stones.”  Human nature was taking over.  Rather than trust God, believe his promises, and stop relying on themselves, these men preferred to fear, and, blinded by that fear, wanted escape.  They thought that Joshua and Caleb were leading them into certain death.

But it really was dumb.  As God himself said, “And how long will they not believe in me, in spite of all the signs that I have done among them?”  These people had seen the miracles Moses performed; they had witnessed the ten plagues firsthand; they had been given water from a rock and received miraculous quail and manna from heaven.  Nevertheless, even after all these things, they thought, “Sure, God did that, but he can’t do this.”  Because of their unbelief, they were cursed to wander through the wilderness for 40 years, while the rebellious generation died out and a new, believing generation rose up in their place.

Think again of Paul’s encouragement to rely on the Lord: “If God is for us, who can be against us?” and as proof, he goes on: “He who did not spare his own Son but gave him up for us all, how will ne not also with him graciously give us all things?” (Rom. 8:31-32).  Like the Israelites, we have witnessed the providence of God already: to them he gave deliverance, nourishment, grace; to us he gave his Son the Deliverer, the Nourishment of his Word and Sacraments, and the Grace of Salvation and Eternal Life.  For the Israelites, what they had already received should have assured them that they would receive what was promised.  For us, what we have already received should assure us of what is promised.

Israel’s 40-year sojourn through the wilderness is one inspiration for the season of Lent—a 40-day sojourn through repentance.  At the end of Israel’s journey, they came to the Promised Land, flowing with milk and honey.  At the end of our Lenten journey, we come to Easter, the Resurrection, a time of joy for God’s eternal gifts overflowing from the empty tomb.  As Israel’s voyage brought about the death of the old, sinful generation and the rising of the new, faithful generation, our voyage of repentance puts to death the Old sinful Adam of our flesh and gives rise to the new man made in the image of Christ.  Lent should be a spiritual exercise in letting go of our selves and our doubts and our fears, placing our trust wholly into the arms of God.  Humble yourselves this season, and be like the father of the child with an unclean spirit, falling before Jesus and crying out: “I believe; help my unbelief!” (Mark 9:24).  Our God is faithful to forgive and to give us promised salvation.

Lord, we believe; help our unbelief!  Keep us from being overcome with the weight of the world, and instead help us to cast all our cares on you, and be assured that you have borne all our burdens and will give us every good thing.  Lead us to daily repentance and sorrow over sin, so that daily we might receive your forgiveness, all on the basis of the passionate death of your dear Son, and his glorious resurrection from the dead.  In his name we pray.  Amen.