A lot has happened over the last couple of days, and the inside of our church looks a lot different.

We found the need to venture into the sanctuary half of the church yesterday, even though that technically was to be part of Phase II.  While working on Phase I proper, however, the ceiling over the sanctuary was noticeably sagging.  Rather than leave that safety hazard, therefore, our members dove in and started to remove the ceiling.  We started by tearing out the drywall ceiling and the insulation.

Half of the drywall was taken down, and, once most of the debris was out of the way, it was time to start cutting into the steel.  You see, our church was originally constructed by putting two trailers together, so the outside walls and roofs are still largely intact.  But in the interests of higher ceilings, the steel had to go.  It came out in sections. 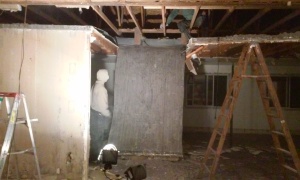 It was an interesting sight, and sparks were flying. 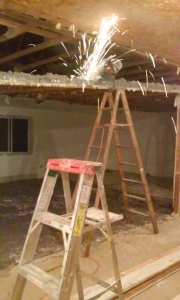 Three sections were broken down yesterday.  And during that endeavor, Jon couldn’t help but show a feat of strength.

This is what we left the sanctuary looking like last night:

View Looking Towards the Chancel Area

In one sense, it’s a little disheartening to see a place of worship come to look so ruinous.  Although by Sunday it will not look so messy, it will be different, and possibly a little uncomfortable.  But this project is a good thing by and large.  Our sanctuary will eventually be more open, warmer, and lending itself more fully to edification in the Spirit.  It is important as we continue forward, too, to be grateful for the work that went into this building originally.  For years this church has served as the worship space for Redeemer Lutheran Church, and without the space from which to build on, we would not have the opportunity now to improve our church.  Ever looking forward to that end product, we can’t help but marvel in the supportive and hard-working congregation we have.  Praise God for giving us these gifts!

The Story of Rick’s Nail

One of the first things Rick did a few days ago was cut through a wall to open up a wider entryway.  It was smooth sailing for most of the work, but midway down the wall the saw suddenly was giving him difficulties.  Pushing through the sweat and the ache, Rick continued to cut, thinking, “If all the cutting is this difficult, we’ll never get this project done!”  But he persevered, cutting millimeter after millimeter, seeming to get nowhere.  Finally, he broke through and cut out the rest of the wall.  When he looked to see what had given him such trouble, he found that he had cut straight down through a nail.  As you can tell from the picture, it’s a pretty remarkable sight.  I think, if we can cut through something as tough as nails, we can get this whole project done with nothing but blessings!

The Gospel in Hebrew: How Ten Hebrew Words Preach Christ and His Work

A valuable insight into the Gospel message preached in the language of the Old Testament. Thank you, Chad Bird, for this piece.

This Monday, October 27th, the day after observing the Reformation, a few of our members started tearing things out. 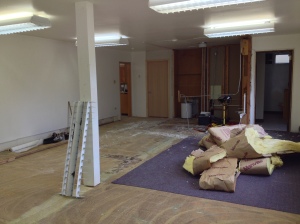 Admittedly, it’s a little messy, but this is what the narthex looked like after the women’s restroom and the majority of the carpet was removed. 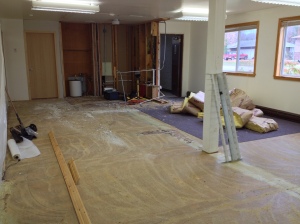 Take a look at some of the insides of our church’s walls.

Where the Women’s Restroom Used to Be

The View Towards the Door of the Church

The mess will likely keep up for a while, but we’re very excited about this building project.  Our kitchen will be larger and more centralized, our restrooms more handicap-friendly and comfortable, and, once we get into Phase II, the sanctuary will expand outward and upward (about two extra feet of height!), with a classroom, office, and cry room as a bonus!  Keep checking in to see the progress of this project, and we’ll share our joys and tears as we go on.  As we move in towards Thanksgiving this coming month, we are reminded to thank God for the blessings he bestows, and here we can certainly see that Redeemer has been blessed with a hardworking congregation, ever seeking to improve our worship space and the edification we receive in it.

O, give thanks unto the Lord, for he is good,
For his mercy endures forever!